Saturday was another beautiful day to ride.  The roads were lightly snow covered from an overnight dusting of snow so I decided to ride the “Batpod” this morning.  I awoke with a slight head ache and very tight shoulders.  I was thankful to be heading out on the bike as I knew it would be a great stress-buster.  My first meeting of the day was breakfast with friends at a favourite local establishment known as the Daily Grill.  It is now going on 6 years that I have been requesting a bike rack at this restaurant.  To date I have made no progress with the restaurant owner or the property owner.  I still remain hopeful 🙂 Until then, the above tree acts as my temporary lock up provided the area is not loaded with snow.  The tree has also grown so much that my U-lock no longer fits around the truck!After breakfast I rode to a near by transit terminal to board the bus to downtown Kitchener.  My Norco Bigfoot fat tire bike does not fit on the front rack of the bus.  The bus drivers today were awesome and encouraging to me when I brought my bike on board. Some times I jam the rear wheel against the folding seats on the bus as shown below and other times I stand with the bike.  When I am standing I keep a hand on one of the brakes so the bike does not roll. 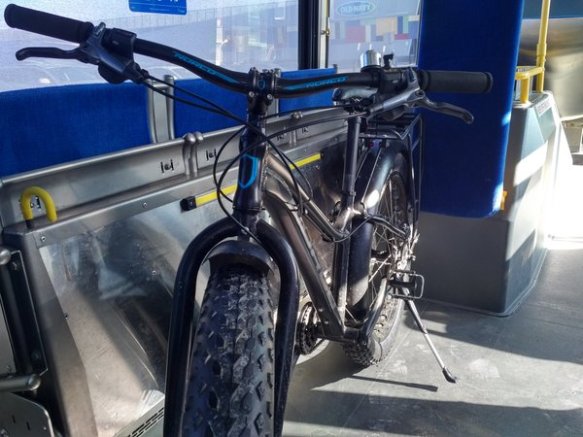 The City of Kitchener active transportation committee organized the annual ‘coldest bike ride of the year’ event.   I am uncertain if I should say the weather did or did not co-operate with the planned ride.   It was far from being the coldest day this winter, but the warmer weather combined with a burst of sunshine seemed to motivate more cyclists to participate. There were 18 bikes and one wee toddler passenger.

The group of us rode from Kitchener City Hall to Waterloo City Hall using the brand spankin’ new Spur Line trail.  This beautiful off-road trail is paved and complete with overhead lights!  From the Spur Line trail we rode on the Iron Horse trail to the Berlin Bicycle Café located in a part of Kitchener known as Belmont Village.

On the ride home I decided to hitch another GRT bus ride for a part of the way.  I wanted to get home so I could get ready to celebrate my Birthday on Saturday night with friends!

Sunday was my birthday! Like most Sundays I walked to and from Church in the morning. That was the extend of my exercise today because I had to work on my City of Waterloo Budget package in preparation for Budget Day tomorrow.  Outside of preparing for tomorrow I had a lovely Birthday.